Please help us maintain and expand this website with a donation!

Just click here to link straight to PayPal. Many thanks!

This website has been built from Barry Fox’s personal collection of tens of thousands of photos collected over forty years of journalism. 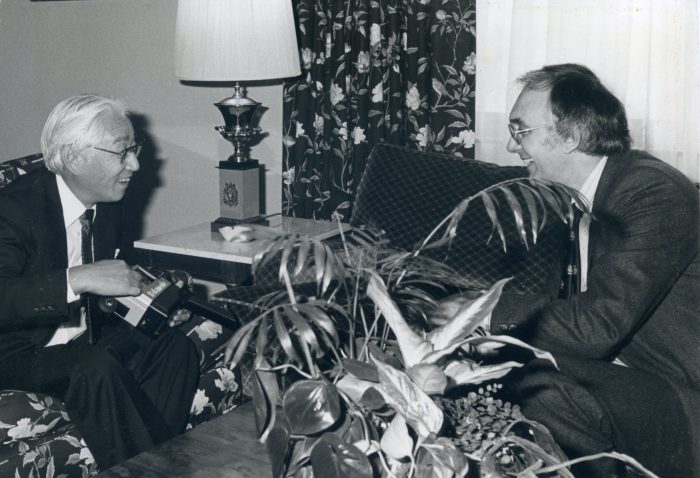 About the author
Barry Fox (pictured with the late founder of Sony, Akio Morita) started out with a degree in Botany but much more usefully trained in electronics in the Royal Air Force. He then worked as a patent agent, patenting inventors’ ideas. From there he moved into journalism, writing and broadcasting first about hi-fi and patents and then progressively covering all areas of consumer electronics and computing technology. Patents remain a very useful tool for discovering what secretive companies are doing but won’t talk about.

In the early years, while still also working in the patent profession, it was legally necessary to use the pen name Adrian Hope. So some old cross references may cite AH as author.

How come?
Until digital photography became the norm, companies routinely promoted their products and services by sending ‘physical’ press releases and studio-produced photos to journalists and magazines. Instead of throwing the pictures away, I kept many of them, along with indexed articles written at the time.

Where else is this photo material stored?
Probably nowhere and certainly not in a one-stop reference database. The companies that provided the original photo material have often gone out of business, or been taken over. Their staff and PR agencies have changed many times over. Company offices now frequently have

This project was initially supported by a grant from the Shiers Trust, administered by the Royal Television Society. Thanks also for early practical help from John Hill, and to Richard Dean for editing and producing the website’s 2021 re-launch, with plenty of help from website designer and photographer John Kentish.

to refer requests for pre-digital images to an HQ in the Far East, and then wait weeks for action – often inaction. Try asking companies for photos of discredited or ousted, executives – or flop products – and see how far you get!

Copyright Note
I own all rights for my own photography, and rightfully own physical copies of photos and images routinely given out to journalists and magazines by manufacturers, broadcasters, trade bodies, and their PR representatives. In many cases it is no longer possible to identify or trace the original source of pictures given to the press.

There has never been a ‘one stop’ source of this largely ‘orphaned’ material. So the Tekkiepix collection appears to be a unique resource which it is important to preserve and make available. My copyright claim is to the digitised copies versioned for easy research access, and also to all the accompanying descriptive words.

However if anyone can show they have good reason and right to request that any specific images be removed from the site, or marked with other copyright claims, please let us know.

The Tekkiepix Hat Logo
Working under the pen name Adrian Hope, Barry wrote a book on curious and commercially unsuccessful inventions, Why Didn’t I Think of it First? One of the most curiously appealing and least commercially successful was A Saluting Device from Mr John Boyle of Spokane in 1896. Hidden mechanics inside a bowler hat automatically doffed and rotated the hat to offer “unique polite salutations” when the wearer bowed his head. The spinning hat never caught on but, as patents never go out of print, you can still read the original hat pat.